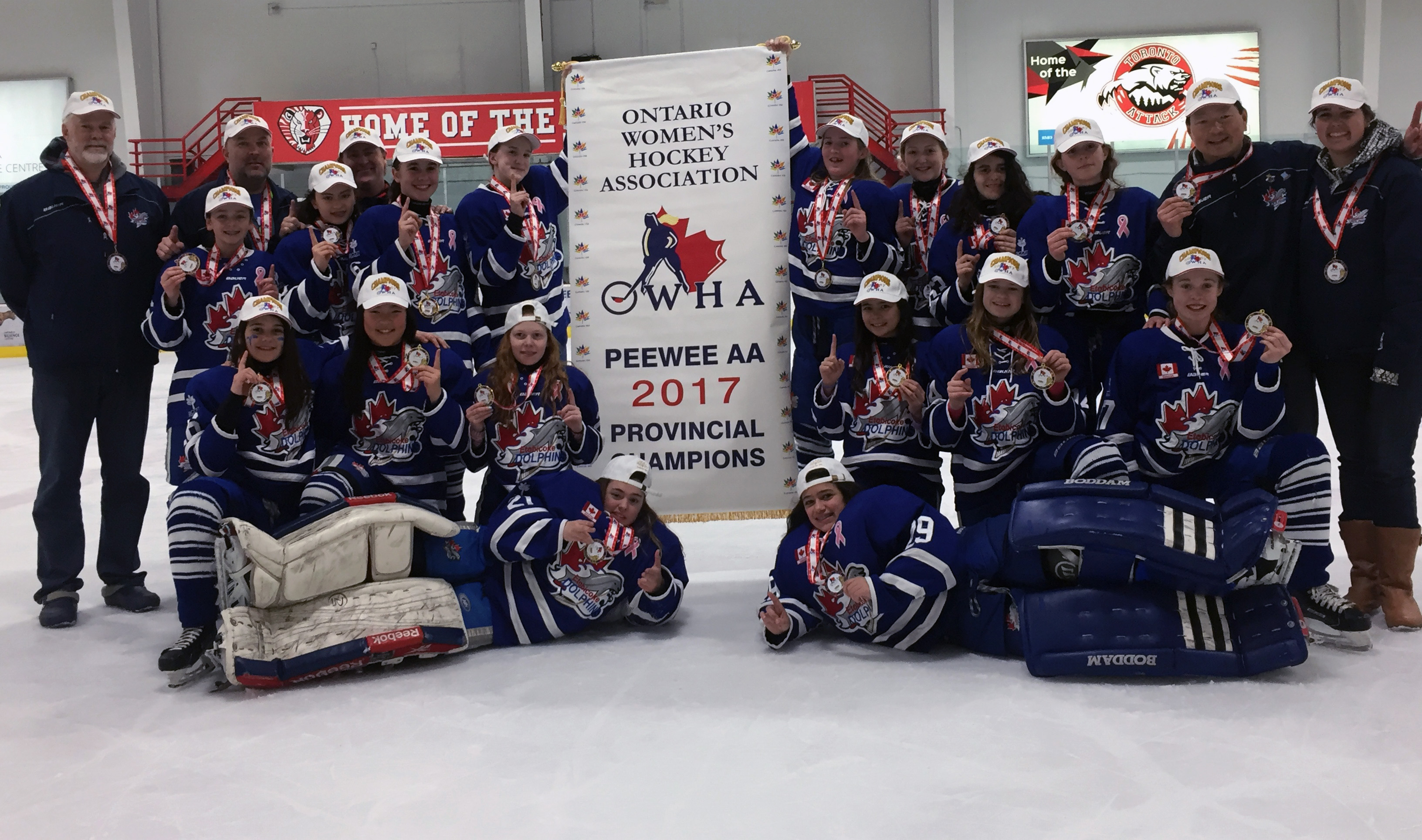 One season = six gold medals and one silver. Not perfect but not bad.

The Dolphins Peewee AA team finished their incredible season with a Provincial Gold coming off winning Lower Lakes Gold the previous weekend. To do it, they were forced to play 12 games in eight days including three of their last six on Olympic-sized ice. These two golds were two thirds of Women’s Hockey’s Triple Crown as the Phins also won Gold in the regular season beating out some great teams in the very tough Central Division. These three goals share a trophy case with gold medals earned in our own Pink the Rink event, and tournament wins in Whitby and Cambridge. The Peewee Dolphins also took home a silver in Rochester after a shootout against their US rival, Chicago Young Americans. 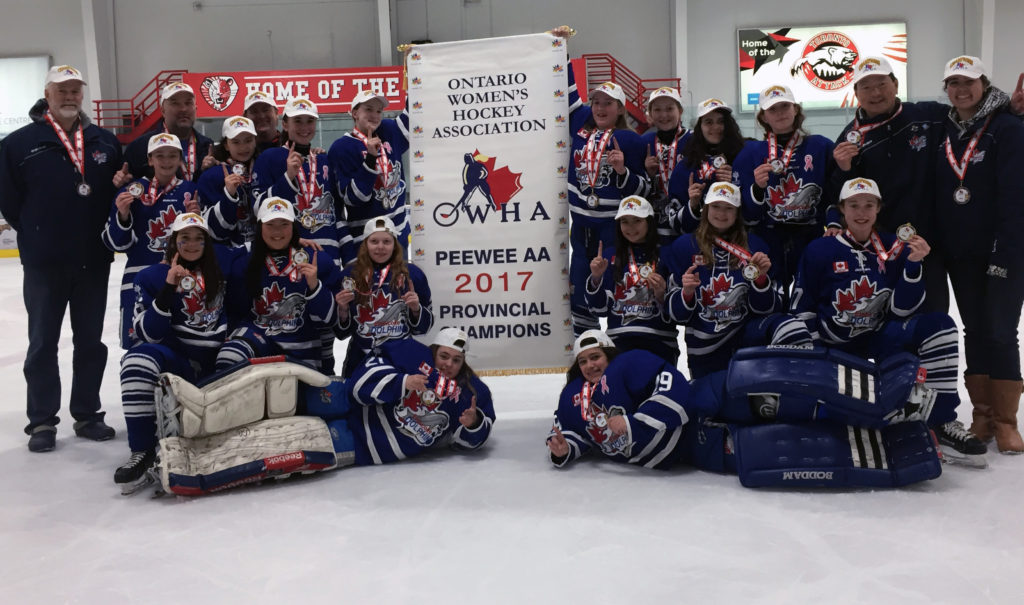 Provincials was a grind for the girls as they won round robin games against Brampton 1-0 and Clarington 8-0. Then, a spirited and desperate Burlington team tied our girls 2-2, but it was enough for the Dolphins to earn top spot in their division and saw us draw against a stingy Barrie Sharks team in the quarter finals. Goals were scored by Charlotte Garofalo, Emma Fulawka, Haley Kliem, Mckenna Van Gelder and Charlie Lewis and assists by Mckenna Van Gelder, Emma Fulawka, Charlotte Garofalo, Haley Kliem, Claire Shepherd, Wallis York, Alyssa Regalado and Natalie Clemenzi in the round robin.

The Dolphins edge out Barrie 1-0 on Claire Shepherd’s tip off Cristina Cavaliere’s hard low shot to the net. Off to the semi. Keeper, Mari Pietersen was perfect and earned her second shutout of the tournament.

Then the Dolphins faced a tough and fast London Devilettes team who was surprising everyone but the Dolphins shut them down with a 2-0 win off a goal from Emma Fulawka and a beautiful goal by Charlotte Garofalo on great passes from Alana Tymochko and Mckenna Van Gelder. Target, Kaelen Parker shut down London, earning her second shutout of the tournament.

The final was a rematch of the Lower Lakes Gold Medal tilt seeing our Phins face off against the Ancaster Avalanche. The game was fast, well played and clean but our Dolphins opened the scoring on a first period goal by Mckenna Van Gelder after a great rush by the line of Van Gelder, Garofalo and Natalie Clemenzi who was playing on a wobbly knee.  Ancaster stormed back with a beautiful second period goal and it was game on. After a short break to consider what the Dolphins could achieve if they could win the period ahead, the third period was all Dolphins and Mckenna Van Gelder scored off terrific passing from Garofalo and Tymochko. With the score now 2-1, the Dolphins shut down the Avalanche attack and struck gold for a sixth time and became Provincial Champions.  Excellent defensive play was seen all weekend from the shut-down crew of Ava Bilton, Diane Choi and Paige Allen.

To put it in perspective, the Dolphins allowed 5 goals in their last 12 games in Lower Lakes and Provincials—an awesome achievement. The team’s commitment to the “defense wins championships” philosophy was above and beyond what the coaching staff and parents could have imagined.

“This is truly a unique and special group of athletes”, said head coach Marty Parker. “To achieve what they did, under the circumstances they did puts them in a class by themselves. I have coached some great teams in my past, but I have never seen a team so committed to each other, to achieving their goals and to doing what it takes to win. These girls will be champions in anything they set out to do. They just refuse to give up and they truly care deeply for one another. They created a culture of performance and with the support from their families and coaching staff, they bought in to a larger commitment of eat healthy, sleep well, think positively and ensure you account for enough rest and recovery”.

The Dolphins finished their season with a record of 59 wins, 9 loses and 5 ties and will go down as one of the most successful Etobicoke Dolphin teams to date.  And one thing is certain: their opponents will remember forever, the day they played the Phins.

A big heartfelt thanks goes out to the coaching staff of Marty Parker, Tom Kliem, Dave Shepherd, Eddie Choi and Stephanie Ross for your time, commitment and unwavering dedication to these girls.