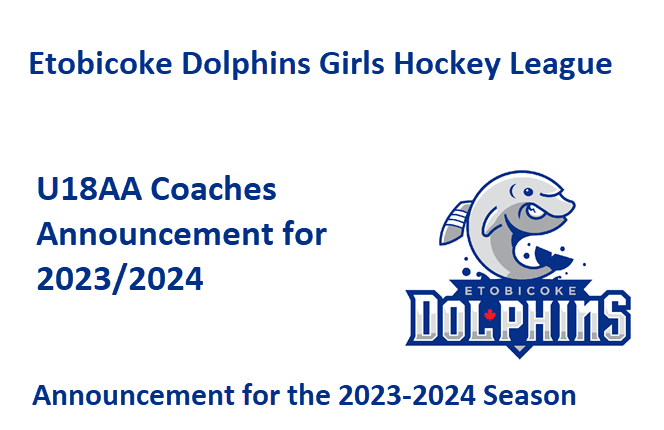 The Etobicoke Dolphins are very pleased to announce the appointment of Wayne Gagne and his daughter Danielle as the coach and assistant coach for the Dolphins U18AA team for the 2023-2024 season. We are really excited that Wayne and Danielle have agreed to join the Dolphins to continue to grow our great game of hockey. They both bring a wealth of experience which will support our young athletes through their hockey journeys

Wayne is returning to the Dolphins organization to coach the U18AA program again. In 2008 Wayne lead the U18AA team to the Provincial Semis leading to the Esso cup. During that time he also ran the Player and Coach Mentorship programs with the Dolphins for 6 years. Wayne brings a wide variety of Professional Coaching skills. Being a Physical Education teacher and a former Professional player for 7 years, he has acquired and developed an excellent approach for teaching today’s youth. His teaching and motivational methods, as well as his ability to demonstrate and model proper techniques so they are effectively utilized in game situations have been the key to his success as a Coach.

Currently Wayne is coaching the Jr. Canadettes and was an assistant coach with the Junior program previously for 3 years.  Wayne coached men’s Jr. “A” hockey (Caledon Canadians) in Ontario for 2 years and then moved to coaching youth hockey. His son’s 97 Toronto Marlboros Team and daughter’s Brampton teams won a combined 4 All Ontario Championships. Wayne’s 1997 Toronto Marlboros team won the Minor Midget North American Silverstick Championship, and 7 GTHL Scotiabank 1st place Cups, 6 GTHL Championships, and was the FINALIST at the prestigious OHL CUP. 14 Players from his team were drafted to the OHL.

As a player Wayne won the All Ontario Championship with his Henry Carr Junior team, a CCHA NCAA Championship with his WMU team, and a Professional Championship with the Brantford Smoke in the Colonial league.   While with Western Michigan Univ. he was a Two Time All American and a Hobey Baker Runner Up his senior year. He finished 2nd in the NCAA scoring as a “defenceman” with 89 points, and held 8 NCAA records. He then skated with Team Canada and was drafted to the Montreal Canadians where he mainly played in  the AHL, the IHL and  ended his career in Europe playing in the Elite leagues in Switzerland, Holland, and Denmark. Currently Wayne has been teaching in the Peel Board for the past 28 Years.

Wayne can be reached at wgagne64@gmail.com

Danielle is currently an assistant coach, alongside Wayne, with the Brampton Jr. Canadettes. Danielle is a very enthusiastic, passionate leader that is always eager to teach and share her experiences to help challenge players to raise their overall game. She works with all players both on and off the ice, and takes pride in offering consistent feedback during both games and practices to further enhance their confidence for success.

Danielle is a graduate of and played D1 at The Ohio State University. She then continued her career professionally playing a season overseas in Germany for the Ingolstadt Frauen Panthers finishing top scorer, and two seasons at home for the Toronto Furies in the CWHL. Previously, Danielle played junior for the Mississauga Jr. Chiefs (Hurricanes), who won the Provincial Gold Medal in 2010. Danielle was also a member of Team Ontario Blue (2009) and Team Ontario (2010) where she won 2 Silver medals at both the Canadian U18 Nationals and The Canada Winter Games.