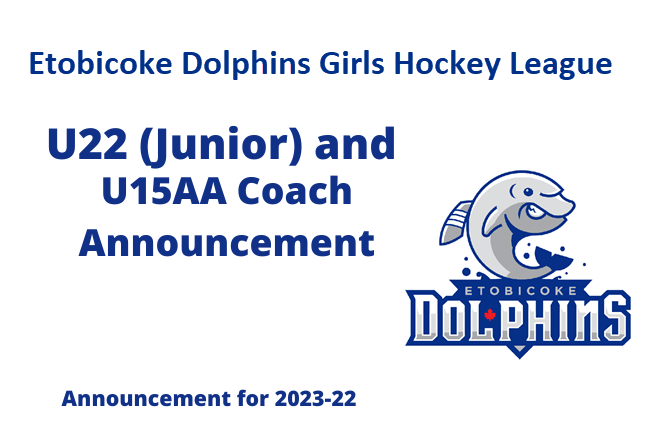 The Etobicoke Dolphins are excited to make the following announcements for the 2023/2024 season:

Joe, is a Hockey Canada HP1 certified coach, and is in his 6th season Coaching the Etobicoke Jr. Dolphins (PWHL) program as Head Coach. He also has Hockey Canada Level 1 & 2 Goalie Coach certifications and is a D1 Coach Evaluator.

Over the past six seasons, the Etobicoke Jr. program has had 56 players earn Canadian or American athletic scholarships as student/athletes.

During the 2019-20 season, the Etobicoke Jr. Dolphins won their first ever PWHL Regular Season Championship, with a record of 27-4-6.

This season, the Junior program has captured the 2021 Stoney Creek Showcase and are back-to-back Champions at the prestigious Stoney Creek showcase. Also, during his tenure with the Etobicoke Jr. program, they have also captured the following:

Steve MacNeil (Etobicoke’s current U13AA Head Coach) brings 25 years of coaching experience as a High Performance Coach with Hockey Canada to the Etobicoke Dolphins. He has played and coached hockey throughout minor hockey, junior and intercollegiate ranks as a member of the University of Toronto Varsity Blues Hockey team.

Professionally as an Athletic Director, Steve believes strongly in developing the technical fundamentals of the game and a total commitment to team goals accomplished in an atmosphere of mutual support.

With several former players earning Canadian and NCAA scholarships, competing at the National level, his staff is committed to developing a strong foundation, which will be the springboard for future success.

Early in the 2022/23 season, Steve and his staff successfully captured the Etobicoke Dolphins Annual Pink the Rink championship.

Steve can be reached by email at 27mac@rogers.com

Jessica DiGirolamo is a former Etobicoke Dolphin and triple crown champion winning the regular season, provincial and the LLFHL championship. In 2016 she was a member of the Team Ontario Red U18 National team that won gold.

As an NCAA athlete, she began her tenure at Syracuse University where she played four years as an undergraduate student, performing duties as captain for the 2020-21 and 2021-22 seasons. She was a vital part of the 2018-19 team that won its first CHA Championship and made the NCAA tournament for the first time in Syracuse program history. Additionally, she has garnered several individual awards including CHA Defensemen of the year (2020-21), CHA All-First Team (2020-21), CHA All-Tournament Team (2017-18, 2020-21), and several CHA weekly Defensemen of the week and month accolades. Jessica is also part of the Canadian Women’s U22 Development Team program, where she earned a spot on this team for the past three years (2019-2021). Additionally, within Syracuse she currently holds the program record for career goals (31) and points by a defenseman with eighty-four total points.

Despite all of her success, team, and individual accomplishments at both Syracuse and the Canadian National level, she remains prideful of her Ontario roots and looks forward to the opportunity to work with young athletes who are starting their lifelong careers in women’s hockey and help them not only develop new skills but to help grow the sport of women’s hockey and most importantly, have fun doing it.