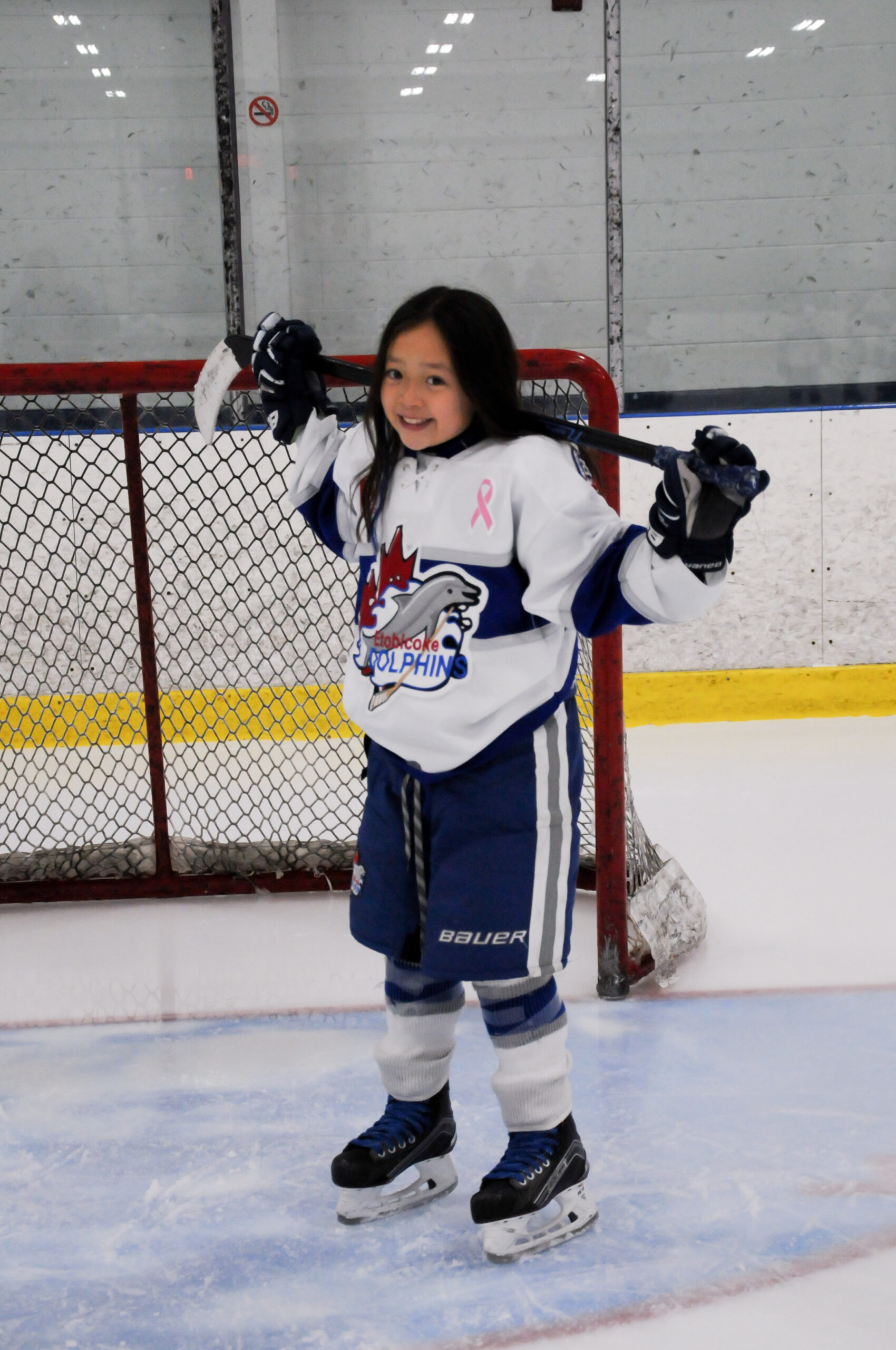 second birthday in the winter of 2010.   That year our time on the ice was mostly limited to me holding Abbey up as we glided around the ice.  The next winter it was time for “learn to skate” and Abbey was thrilled that they had little plastic hockey sticks on the ice to play with.

By 2012, and not quite 4 years of age, Abbey was in full hockey gear and became an Etobicoke Dolphin for the first time!

Abbey not only loved hockey but she loved everything that is a part of this game.

Game days were filled with enthusiasm and excitement about the upcoming match.  Pre-game talks with Abbey would reveal all her plans for the game.  She would draw plays out on her hockey white board, and talk about the “goal” that she was going to score or how she going to was going to protect her goalie as a defenceman.

On the ice Abbey was a fierce competitor. Even though she was often one of the smaller girls on the ice, she would take on her bigger opponents without fear.  Abbey would get knocked down and just bounce back up to renew the battle.

After the game or practice was over, and her cheeks were rosy red with effort, Abbey would always say happily to me, “Nana feel my shirt – see how sweaty it is”.  A sign of how hard she always worked.

Abbey was only 9 years old when she passed away from a sudden onset rare blood disorder.  Her death not only devasted her family, but our entire hockey community.

Hockey is so much more than just the game and the practices.  Abbeys attitude was never one – of win at all costs.  She was an advocate for fairness, and friendships and was always positive in her perseverance as both a teammate and a friend.

These friendships are to be treasured.   Adventures and sleepovers, compassion in the dressing room and a sense of silliness and fun that was always welcomed.  Abbeys spirit was contagious to all who knew her.

As an original founder of the Etobicoke Dolphins and a Coach for many many years, I am so proud that the Dolphins are recognizing the qualities that Abbey shared with this wonderful organization and sharing them with our hockey community.

Honouring our girl and our family by retiring Abbey’s number 77 and hanging her banner is a very emotional tribute to us all.

Every player in the Etobicoke Dolphin organizations proudly wears the AT77 heart upon their jersey.

Abbey presented me with a plaque at the end of the hockey season when she was just 6 years old.  I will always treasure what she wrote to me.  I would like to share this with you.  “A good coach is nice and teaches you how to skate.  They also do fun things and cheer you on.  They don’t care if you win or lose.  They just care if you try your best, good coaches’ make your team a nice place to be.  My Nana is the best coach ever.  I love hockey and I love my hockey coach.”………………Abbey my greatest honour was to be your coach.

Abbey’s light continues to shine through her charity – Abbey’s Goal.

Abbey believed in her ability to make change and to spread love.  Abbey’s Goal will continue Abbey’s legacy through supporting organization and initiatives that encompass Abbey’s spirit.  Our mission is to spread love. Please visit us at www.abbeysgoal.com