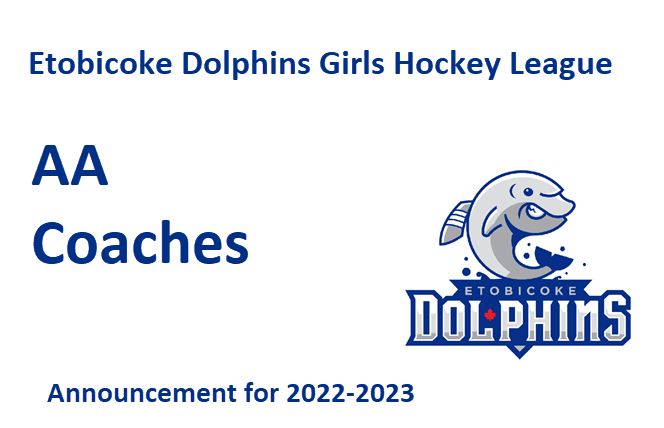 Joe, is a Hockey Canada HP1 certified coach, and is in his 6th season Coaching the Etobicoke Jr. Dolphins (PWHL) program as Head Coach. He also has Hockey Canada Level 1 & 2 Goalie Coach certifications and is a D1 Coach Evaluator.

Over the past six seasons, the Etobicoke Jr. program has had 56 players earn Canadian or American athletic scholarships as student/athletes.

During the 2019-20 season, the Etobicoke Jr. Dolphins won their first ever PWHL Regular Season Championship, with a record of 27-4-6.

This season, the Junior program has captured the 2021 Stoney Creek Showcase and are back-to-back Champions at the prestigious Stoney Creek showcase. Also, during his tenure with the Etobicoke Jr. program, they have also captured the following:

Kelly is currently in her fifth year with the Etobicoke Dolphins having spent the last three years as head coach of U15 AA and two years as assistant with the Junior Dolphins. In addition to her role as coach, she is the Director of Player Development for the Rep programs in the organization. Kelly is a High Performance 1 coach.

Within the OWHA, she was most recently a coach with Team Ontario (Red) at the U18 Central Canada Challenge, and on staff with Team Ontario (Blue) at the 2019 National Women’s U18 Championship. She continues to be involved with both the U16 and U18 Ontario High Performance programs, coaching at development camps, the Ontario Summer Games, and National tournaments.

Prior to coaching, Kelly played professionally in the National Women’s Hockey League (NWHL) and received a full scholarship to play Division I for the University of Maine, a captain in her Senior season. She is currently a teacher and the Director of Women’s Hockey at Everest Academy, a private school for elite athletes.

As a coach, Kelly’s goal is to create an environment in which athletes can become the best versions of themselves on and off the ice. More specifically, she aims to help create well-rounded athletes by providing them with the information, tools, and opportunities to continue to grow within a High-Performance setting.

Karolina has 6 years experience as a head coach in youth hockey including 3 years as the head coach for the U15AA Leaside Wildcats and U18AA Etobicoke Dolphins. She has over a decade of experience teaching power-skating, skill development and strength and conditioning to young athletes. Karolina believes that as coaches you need to provide athletes with a platform to succeed and find ways to build their confidence, inspire players to push outside their comfort zone, and teach the intangibles that are inherent to success in sports at the highest levels including teamwork, accountability, determination, communication and having a growth mindset.

Karolina’s hockey experience includes competing at the Canada Winter Games in 2017 for Team BC, finishing top ten all time in points and captain for 3 years while competing for the University of Toronto Varsity Blues, three years competing in the Canadian Women’s Hockey League including assistant captain of the Calgary Inferno and winning the Clarkson Cup with the Markham Thunder in 2018. Academically, Karolina has her Bachelor’s degree in Physical Health and Education (kinesiology), MSc in neuroscience and PhD in Rehabilitation Sciences from the University of Toronto and often draws on evidence based knowledge to guide team plans.

If you are interested in the U18AA 2022-2023 program then please complete this player recruitment form.

A native of Brampton, Ontario, Julie Allen played NCAA Division I hockey at the University of New Hampshire from 2008-2011. She graduated with a Bachelor of Arts in Social Work from UNH in 2011. After college, Julie continued her playing career in the Canadian Women’s Hockey League (CWHL) with the Toronto Furies from 2013-2019. Julie was a member of the 2014 roster that led the Furies to a Clarkson Cup Championship. During the 2020-21 season, Julie was a member of the Toronto Six of the National Women’s Hockey League (NWHL).

In addition to her playing career, Julie boasts an extensive background in coaching and skill development. Julie has experience as a skill instructor at Varsity Hockey (Brampton, Ont.), Journey to Excel (Etobicoke, Ont.) and most recently Everest Academy (Vaughn, Ont.). Julie is currently in her third year as an assistant coach with the Etobicoke Dolphins Bantam AA team. Julie is also working closely with several other teams within the association, as part of the on-ice skill development team.

Julie can be reached at dolphinsu15aa@gmail.com

Andrea played for McGill University, where she was a two-time USport National Champion with the Martlets. Andrea is currently in her first season coaching U15 AA with the Dolphins. Before joining the Dolphins, Andrea coached five seasons with the Kitchener/Waterloo Jr. Rangers PWHL team, specializing in defensive teams. In addition to her hockey experience, Andrea has completed her PhD in Infectious Diseases at the University of Toronto.

Steve MacNeil brings 25 years of coaching experience as a High Performance Coach with Hockey Canada to the Etobicoke Dolphins. He has played and coached hockey throughout minor hockey, junior and intercollegiate ranks as a member of the University of Toronto Varsity Blues Hockey team.

Professionally as an Athletic Director, Steve believes strongly in developing the technical fundamentals of the game and a total commitment to team goals accomplished in an atmosphere of mutual support.

With several former players earning Canadian and NCAA scholarships, competing at the National level, his staff is committed to developing a strong foundation, which will be the springboard for future success.

Steve can be reached by email at 27mac@rogers.com

Jessica DiGirolamo joins the staff as a former Etobicoke Dolphin and triple crown champion winning the regular season, provincial and the LLFHL championship. In 2016 she was a member of the Team Ontario Red U18 National team that won gold.

As an NCAA athlete, she began her tenure at Syracuse University where she played four years as an undergraduate student, performing duties as captain for the 2020-21 and 2021-22 seasons. She was a vital part of the 2018-19 team that won its first CHA Championship and made the NCAA tournament for the first time in Syracuse program history. Additionally, she has garnered several individual awards including CHA Defensemen of the year (2020-21), CHA All-First Team (2020-21), CHA All-Tournament Team (2017-18, 2020-21), and several CHA weekly Defensemen of the week and month accolades. Jessica is also part of the Canadian Women’s U22 Development Team program, where she earned a spot on this team for the past three years (2019-2021). Additionally, within Syracuse she currently holds the program record for career goals (31) and points by a defenseman with eighty-four total points.

Despite all of her success, team, and individual accomplishments at both Syracuse and the Canadian National level, she remains prideful of her Ontario roots and looks forward to the opportunity to work with young athletes who are starting their lifelong careers in women’s hockey and help them not only develop new skills but to help grow the sport of women’s hockey and most importantly, have fun doing it.